#ThinkSmartStaySafe: How Inspector Simon Stevens is bridging a gap between overseas students and Victoria Police

From his humble beginnings as an officer patrolling through country Victoria to taking charge as a Police Commander for major Melbourne events like White Night, Moomba, the AFL Grand Final and Melbourne Cup, Inspector Simon Stevens’ roles may have varied since he first became a proud member of Victoria Police in 1994 but his priorities have never changed: to serve and protect those in need of immediate assistance.

In his current role as Local Area Commander, Simon has a large responsibility to keep Melbourne’s CBD safe for all who visit or live in the city – this includes helping the many international students that come to Melbourne for an education.

“As a city inspector, I’ve got a lot of universities and out of the 200,000 international students in Victoria, a large majority are here in the city,” he said in an interview with Meld.

In identifying Melbourne’s high volume of international students, Simon saw an opportunity to engage with a community that often carried assumptions or misconceptions around law enforcement in Australia — ideals and biases brought on by students’ perceptions on how police operate in their home countries. He sought and created a portfolio dedicated to Melbourne’s overseas students and saw the need to create further awareness of international students’ safety across the city and help students understand Victoria Police’s role in their wellbeing.

“I love meeting new people and learning about new cultures and saw an opportunity to make a difference to the student experience in Melbourne so I jumped at it,” the city inspector said.

Since taking up the international student portfolio, Simon has actively worked with this diverse community to bring visibility around the type of work police in Victoria do. He has attended many international student events including the recent Council of International Students’ Australia’s National Conference and Victorian International Students’ Conference to speak about the importance of safety and encourage students to report crime and contact emergency services, such as police, when in need of immediate assistance.

Awareness, visibility and community work are just part of what Simon’s larger plan to assist Melbourne’s overseas students and help them become more comfortable in approaching police when they feel they are in danger, or when they identify and report a crime that has occurred.

“I want to make it that the international students who come here, look at Victoria Police and just think, ‘Oh yeah, I can go speak to them – it’s easy’,” he said. 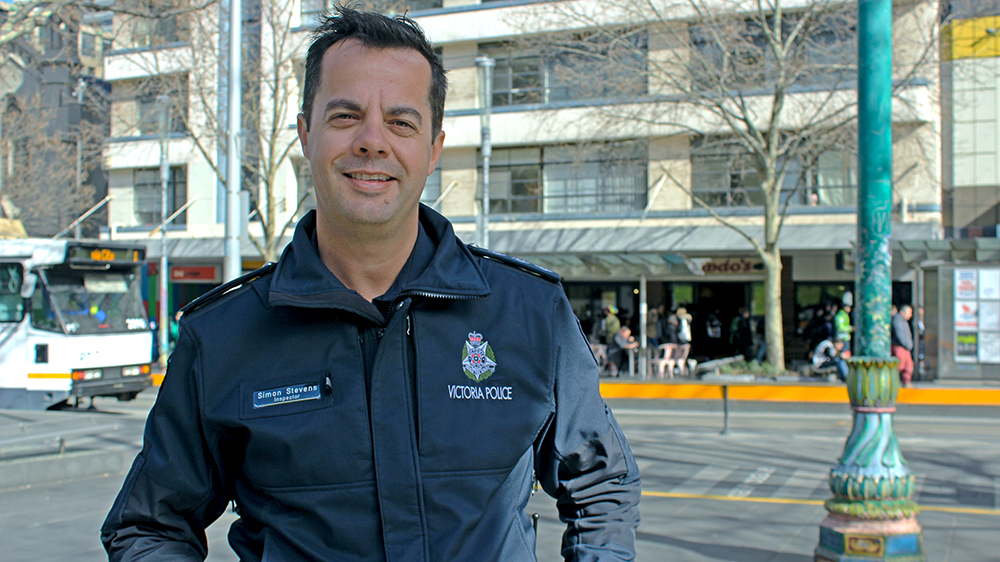 And indeed as I discovered, it was easy to speak with Simon and his team – in fact, it was as simple as grabbing coffee with a new friend.

“If you come with a smile, you get in with a conversation and it’s something that’s always worked and that I’ve used in my career,” he said. “A friendly face always gets a good result.”

In my conversations with Simon, he spoke fondly about his experiences with international students thus far. He beamed as he showed me photos from a recent friendly soccer match between Victoria Police and international students, recounting in particular one memory of a Bangladeshi student he met at the community soccer game.

“I was talking to one of the students and he said to me, ‘I just want you to know that Victoria Police was the most friendly police in the world’,” he said.

“He walked into a police station, it was his first time. They helped him and it was as simple as filling out forms, which is tricky and complex, and the experience he got – which I want every time – was a pleasant one. And for him to stop me and approach me to say that – and he didn’t have to – I was really pleased and quite happy to hear that.”

Although Simon acknowledges that there will be challenges given the cultural differences and make-up of all international students, he is nevertheless optimistic in his aims to change the outlook that students may hold of police.

“If [students] ever become a victim of anything that happens, we hold those perpetrators to account,” he stated.

“I’ve got a big team, and we’re looking to make sure that doesn’t happen again and that those who chose to do that, we’ll hold them accountable. We’ll catch them and prevent them.”

So don’t hesitate to ask for police when you call Triple Zero (000), should a situation arise where emergency assistance is required. Victoria Police, Simon reassures, is there to help.

And if you’re not in any danger, perhaps say ‘hi’ to a police officer and start chipping away at those barriers of communication.

This story is part of Meld Magazine’s “Think Smart, Stay Safe” campaign and has been produced with assistance from Victoria Police.

The campaign aims to provide international students with relevant resources that ensure students are aware of when to report a crime, how to identify when a crime has happened to them and who students can report to.

If you’re a victim of crime, contact the nearest police station in person or via phone to make a report. For information about local police stations in Victoria, visit Victoria Police’s official website.