YOU can encounter all kinds of characters when you’ve been in the dating game for awhile. Marcella Purnama sheds some light on different personality types – and how they can make or break your relationship.

When Forrest Gump famously compared life to a box of chocolates, he was probably referring to the dating game. Anyone who has had more than one boyfriend or girlfriend knows that finding ‘The One’ can be seriously hard.

Everyone can fake a likeable persona or at least hide less desirable aspects of themselves on the first date. Some can do it for months at a time before you get suspicious. When they finally do show their true colours, most people fall into a couple of predictable categories – the Jock, the Drama Queen, the Cheater.

We’ve picked our top personality types for girls and guys. Print them out, carry them around in your breast pocket and hopefully, they’ll help you figure out what you’re going to get when you dip your hand into the box of potential dates.

And because we’re movie geeks, we have made a reference to a movie character for each of the types. So they go something like this:

Mr. Metro cares too much about his appearance, and by doing so, he’ll unconsciously influence you to too. He’ll dress nicely. No shorts and sandals, but a casual shirt and white shoes. He knows the latest trends and can tell the difference between your flats and wedges. He himself has nine pairs of very good shoes that he always keeps clean. Odds are, he’s tidy and organised.

This is the type of guy you’re proud to stand next to. He smells good and looks incredibly charming.

Pros: Your friends will (slightly) envy you and he’ll make a good first impression on your parents. You’ll love to hug him in public because he’s well put together and, oh boy, he smells so good in that Calvin Klein perfume. He’ll buy you designer clothes and go shopping with you. But best of all, he’ll take you to all those fancy places  for dinner.

Cons: He might look better than you and that’s a problem because you’ll feel like you need to keep up with him. He might be popular with the women and have a very limited number of male friends. He’ll look into the mirror a couple of times an hour and that’ll disturb you because even you don’t even check your make-up that often. Oh, and he spends a lot of money, mostly on himself.

Movie muse: Justin Chambers as Alex in Grey’s Anatomy. He’s rough and looks like he doesn’t give a sh*t about anything.

Mr. Mind-your-own-business never speaks his mind. He doesn’t care what you eat for lunch, what you’re wearing to that party or when you’re going for that job interview. He doesn’t want to eat out, he’s comfortable in front of the TV and he doesn’t even notice that new dress you bought for your second anniversary.

This type of guy is usually loyal, despite being a pain-in-the-ass. He doesn’t care how you look or how much weight you gain.

Pros: Rest assured he won’t hit on another girl – he’s just too lazy. He is comfortable with you and that’s it. While he doesn’t look like he’s paying attention, he does most of the time, he just doesn’t see the point of telling you he’s listening. He has many male friends and will usually be into sports or games.

Cons: Your friends will spend every day assuring you that he loves you. Your parents will question if he’s serious. His friends will tell you to chase after him because he won’t chase you. You can’t hold his hands in public – he’s just not the type. In fact, you can’t show your affection in public at all. Odds are, he thinks being Facebook official is the stupidest thing on earth.

Movie muse: Sandra Bullock as Margaret in The Proposal. She has a good career, zero social and love life and only thinks about her professional life.

Ms Ambitious is the typical leader in your relationship, not you. She’ll take the wheel and prioritise her work life over everything else. She has grand dreams and, to some people, she might seem obnoxious, selfish and mean. She works hard, so hard in fact that she has few true friends. She’ll have high expectations of those she’s close to and might befriend you solely to take advantage of you.

This type of girl is thirsty for success and doesn’t tolerate failure.

Pros: She is so clever and professional, you’ll have tons of things to brag to your friends about her. She is independent, so you don’t need to look after he.. She’ll make you grow professionally and set the bar high so you want to succeed in life.

Cons: She is hard to maintain and she won’t submit to your leadership. After all, she’s the alpha tigress. She’ll have high expectations of you and make you feel intimidated about your level of professionalism. You won’t be her number one priority and she’ll have little interest in what others think of ‘what a normal relationship should be like’. She is hard to open up to and gaining her trust might be a pain in the ass.

Movie muse: Uma Thurman as Jenny in My Super Ex-Girlfriend. Breaking up with her is not a good idea because she’ll continue to stalk you for the rest of your life. 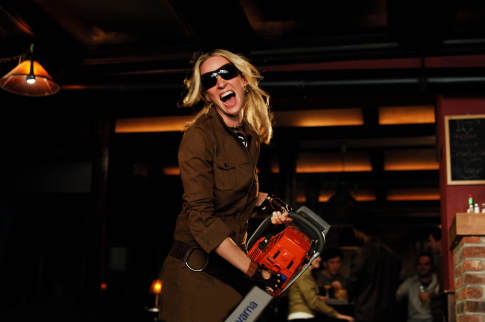 Miss Possessive will want to know everything about you – starting with what you ate for breakfast, brunch, lunch, tea, dinner and supper. She wants to know what you’re doing  24/7 and she gets jealous pretty easily. Crying is her special talent and she’ll try to make herself looks helpless. You’ll end up feeling bad and try to fulfil her every need. She is clingy and dependent and she limits your freedom.

This type of girl will make you feel wanted, but most guys can’t tolerate being chained.

Pros: She’ll tell you she loves you every day and she’ll attend to your every need, making you happy in the process. She’ll try hard to be the kind of girl you want and she’ll want to get to know your friends, although often for the wrong reasons.

Cons: She’ll rob your every freedom and she’ll cry every time you want to spend the afternoon watching soccer with your friends instead of watching Twilight with her. She’ll text you every five minutes and speak to you on the phone for two hours before you go to sleep. She doesn’t want you to have any female friends and she is quite sensitive. If you don’t like to be told what to do (and most guys don’t), you’ll want to break free at the first opportunity.

Do you agree with these personality types? Have any others to add? Share your suggestions in the comment box below!